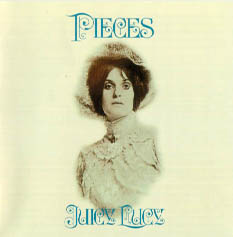 Who was the mysterious Juicy Lucy? Glenn 'Fernando' Campbell was always meaning to tell me. The cheerful dude in the big hat who played the steel guitar loved to keep everyone guessing and he never revealed his secret. At least - not to me. But Lucy was doubtless one of those ladies of the road, who lubricated the wheels of rock, if you'll pardon the phrase. Musically speaking Juicy Lucy, the band that bore her name, was one of the most respected outfits to come howlin' and wailin' out of the Sixties' blues boom. They had style and class. They also had some of the finest musicians of the day, ready to rock and eager to tour. Their debut album 'Juicy Lucy' (Vertigo), released in 1969 became famous for its notorious gatefold album sleeve, depicting a plump, naked lady covered in grapes, bananas and a half consumed melon. Not a pretty sight, but once seen, never forgotten.

Despite their dramatic launch and excellent credentials, the band never quite made it into the international super league. They had a Top Twenty hit in 1970 with their version of Bo Diddley’s ‘Who Do You Love’ and a subsequent hit with ‘Pretty Woman’. Glenn was filmed in action with the band for the rock movie 'Supersession' and Juicy Lucy went on to record several more albums for Vertigo, Polydor and Island, including 'Lie Back And Enjoy It', 'Pieces' and 'Get A Whiff Of This', before they finally broke up in 1972.  Juicy Lucy underwent considerable line up changes during this turbulent period. The band featured on 'Pieces' provides revealing aspects of a fascinating saga which began when Glenn Campbell first arrived in Britain from the States, and ended with the final version of Juicy Lucy, fronted by guitar legend Micky Moody. 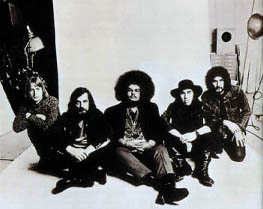 The roots of Juicy Lucy lay way back in The Misunderstood, a band championed by both the author of these notes and the lugubrious, mild mannered Radio One DJ John Peel. The reasons for this enthusiasm lay in the fact that Glenn Campbell was not just a fine musician who played a pedal steel guitar with great gusto. He was an American in London and thus seemed closer to the source. He was also very funny and entertaining, and liked a glass of English beer. His laid back sense of humour provided a welcome contrast to the attitude of many British blues practitioners, who seemed to imagine that you had to undergo some sort of private hell and spread a message of unrelenting gloom to be considered a true blues man!

The original Misunderstood was formed in 1966 and reformed for its trip to England. They made two singles for Fontana including 'Children Of The Sun,' and featured good looking young singer Steve Hoard. However the Misunderstood were eventually superseded by a more commercial Juicy Lucy. The first Lucy lineup included Ray Owen (vocals), Glenn Campbell (steel guitar, mandolin and vocals), Neil Hubbard (guitar), Chris Mercer (saxophone, and piano), Keith Ellis (bass and vocals) and Pete Dobson on drums. The band was managed by Nigel Thomas who also looked after the affairs of Joe Cocker. A controversial but energetic music biz figure, Nigel died of a heart attack a couple of years ago. Micky Moody (born August 30, 1950), who is featured on the present album, remembers seeing the first version of the band on the road. 'The band was virtually formed around Glenn and everyone remembers their first album cover with the lady covered in fruit! I think her name was Zelda Plum. It was a great album and I remember seeing the band in action at their early gigs.’

Moody is from Middlesborough. He went to school with Paul Rodgers who later came to fame with Free and Bad Company. Micky and Paul formed a band at school called The Roadrunners which became The Wild Flowers when they moved to London in 1967 and 'starved to death in our caftans!' Micky later went home to study classical guitar while Paul Rodgers met Paul Kossoff and Simon Kirke and formed Free. Says Moody: 'I went back to the North East and was asked by a local club owner and singer called John McCoy to help form a blues band called Tramline.' The singer was friendly with record boss Chris Blackwell and the band released two albums on Blackwell's Island label. In March 1969 Moody auditioned for Lucas & The Mike Cotton Sound, a well known soul band. He got the gig, but switched to Zoot Money's band for a few months in 1970. He'd got to know Zoot's regular singer Paul Williams, who by this time had joined Juicy Lucy. Micky was brought up to date on all the latest Juicy gossip. 'Ray Owen had been sacked after a couple of months and Paul had got the gig. He told me Neil Hubbard was leaving and asked if I'd like to join on lead guitar. I said, 'Great!' I went straight into recording the album 'Like Back And Enjoy It.' We were gigging all the time and became particularly popular in Germany where the band was very respected."

However it proved increasingly difficult to break out of the club circuit, and reach a higher level of acceptance. "We made another album 'Get A Whiff Of This' before the group finally disintegrated in 1971.' Glenn Campbell went back to America, apparently disillusioned, but during their time together the, Campbell/Moody guitar partnership

had worked well. ‘It was good because we didn't get in each other's way. I liked Glenn's playing and did a bit of slide guitar myself, using the bottle neck. Yes I remember Glenn wearing his big hat. But we all used to do that, it was quite trendy at the time!’

Despite the defection of the mainman, Paul Williams wasn't ready to give up. ‘Paul said he wanted to keep the band together. He wanted me to be the lead guitarist and also play bottle neck slide and the band kind of reformed. We had the famous rhythm section of Ron Berg and Andy Pyle from Blodwyn Pig. The line-up varied from time to time and Bernie Marsden actually came down for a blow. We were looking for another player because we wanted twin guitars. I'd been promoted to lead and we needed a rhythm player to get that American funky sound, without being too heavy. Bernie came down, but he was wrong for the job, as he was more in the Clapton vein.’

Says Micky: ‘The music had a more mellow edge to it. We got a deal with Polydor to record the 'Pieces' album which was produced by Bruce Rowlands, drummer with the Grease Band.'

It was recorded at Olympic Studios, Barnes in December 1971.  Most of the songs were written by Paul and a lyricist friend of his called John Edwards. There were a few guests on the album. Albert Lee and Chas Hodges were on backing vocals and Ian McLagan from the Small Faces and Mick 'Wynder K. Frogg' Weaver were on keyboards. Incidentally those two guys have been working together again on albums in Los Angeles.’ 'Pieces' is packed with good performances and kicks off with a rousing version of Chuck Berry's 'Promised Land' intended as a tribute to the master. ‘Although it was mainly a mellow album we wanted to show we could still play rock'n'roll,’ says Micky. ‘The next song, 'Cuckoo', was one we'd head on a Taj Mahal album called 'Natch'l Blues.' This showed the kind of West Coast influence on the band.

We really liked Taj Mahal and Ry Cooder. 'It Ain't Easy' was a song Zoot Money wrote and passed on to Paul, and 'Suicide Pilot' was a Williams/Edwards original and a good rock'n'roller. Some of the songs have early Seventies' style lyrics, like 'Dead Flowers In The Mirror' which I recall was a bit of a country spoof!  The final cut 'How Can A Poor Man Stand These Times' was taken from Ry Cooder's first album and was written by a blues singer called Alfred Reed. Did the album do very well? I don't think so I haven't been paid for it!'  The band virtually split up not long afterward the album was released in the summer when Paul left to join Tempest. Yet the band struggled on with Frankie Miller for a couple more gigs and Bobby Harrison also sang for a while.

We tried to get Frankie Miller into the band but his management said 'no.'  Then Bobby said he had a management deal and asked if we'd like to form a band with him. So we formed a new band called SNAFU and in 1972 we toured with Joe Cocker in Europe and did some gigs with Slade.  But as Nigel Thomas, our manager, was looking after Joe Cocker, we sort of got pushed to the background. At one point I was asked to join Boxer with Mike Patto but didn't really fancy that, so I teamed up with Bobby Harrison and that was the end of Juicy Lucy.’

It was a sad end to a band which had started out with such promise, and high hopes.

Amazingly, despite all the line up changes and shifts in musical direction, the band's name alone could still command strings of college and club gigs right up to the end, such was the demand for 'live' music in those days. Subsequently, Moody did three albums with SNAFU.  After they disbanded in 1976, Moody returned to session work and in that role backed singers Graham Bonnett, Frankie Miller, Chris Farlowe, Sheena Easton, Eric Burdon and Roger Chapman. In the mid-seventies, David Coverdale asked him to work on a project that became the first Whitesnake album. Micky played lead guitar on the album, contributed four songs and subsequently toured the world with Whitesnake.

Moody has also recorded with Bob Young ('Young And Moody' album recently reissued on Repertoire) and worked with Bernie Marsden in the Moody Marsden Band. Recently Moody has reunited with Paul Williams to sing in a new band called Blue Thunder. No doubt, when the last punters have left and it’s time for a drink at the bar, reminisce and they swap tales of the days when Juicy Lucy was on the loose! 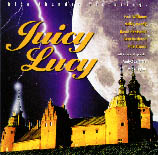 Steel guitarist, Glenn Fernando Campbell, was the star behind this band. He'd joined them from The Misunderstood. Their vinyl zenith is usually considered to be their first album which contained a number of tight, well constructed songs, including a fine cover of Bo Diddley's "Who Do You Love?", which also took them into the 45 charts. It came on the now big collectable spiral Vertigo label in an attractive gatefold sleeve. Sadly it was downhill thereafter, their fortunes were hardly helped by several personnel changes. Paul Williams, ex-Zoot Money, came in on vocals, replacing Roy Owen on the second album, but the result was a disappointment. None of the original line-up survived for their fourth and final effort, "Pieces". The line-up for this included Andy Pyle, whilst he took a brief break from Savoy Brown. The final verdict must be that they failed to achieve their early promise.

The Sequel compilation also includes a couple of previously unissued tracks, "I'm A Thief" and "Changed My Mind, Changed My Sign". The Vertigo Annual 1970 included their own composition, "Mississippi Woman".